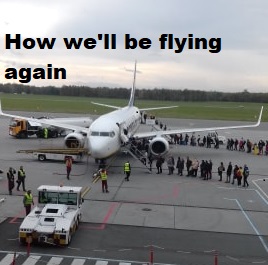 The European tourist industry accounts for half of World tourism.It represents for 10% of Europe’s earnings and 12% of jobs. So it’s huge.

Hungary has been the first country to try to bring some normality to air travel. The Budapest airport authority claim that the safety of passengers and staff is it’s first priority in terms that we’ve become familiar with.

More specifically they are disinfecting all areas of the airport, making hand sanitiser available, managing queues, closing every other seat in the departure area,providing face masks for staff who are in close contact with passengers (such as security staff), and putting up information signs.

Wizzair have restarted services from Budapest and several other airports including Luton.

The EU is meeting to discuss measures to allow air travel to resume. One proposal is for checks to be carried out at the departure airport (tests on arrival are considered to be impractical).

Proposed measures include temperature checks and blood tests. The Dubai airport authority has introduced blood tests with results being made available in 10 minutes. This would allow a certificate for Covid19 to be issued.

Airports are used to introducing security measures quickly, and if airlines want to fly to European destinations, they will have to comply.

Many EU Governments are arguing that airlines and tour operators should be able to offer vouchers in place of refunds and five countries are already allowing this, even though it breaches EU law.

The EU’s position is currently that vouchers might only be allowed in place of refunds if there is insurance against insolvency.

Spain is allowing hotels to open from 11th May. In Greece it will be 1st June, though seasonal hotels will be made to wait for longer. Poland is likely to give it’s citizens vouchers worth over £200 for domestic tourism, while Germany is warning against worldwide travel until 14th June.

There are calls for a more coordinated approach and an aid package for the travel industry.

But where would the money come from?

Many countries are unhappy about existing EU budgets being redirected into supporting the tourist sector, or about having to pay more into the EU to bail it out. So they are looking for ways to fund a bail out by raising funds from outside the EU.

Poland is proposing a further clamp down on tax havens, a digital tax (that would hit US companies like Facebook and Google), a Carbon Border Tax and a Financial Transaction Tax.

All of which would mean increasing the EU’s tax raising powers, temporarily at least.